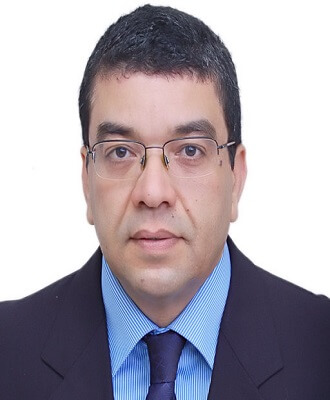 Anouar Alami studied Chemistry at Montpellier II University, France and He received his Ph.D. in 1991. He then joined in 1992 the department of chemistry at the faculty of Sciences Dhar El Marhaz, Sidi Mohamed Ben Abdellah University (Fez, Morocco). He prepared his state doctorate thesis degree in Organic Chemistry in 1997 at SMBAU. Believing strongly in the cognitive complementarity of science and in parallel to all his responsibilities (Head of Department of Chemistry, elected for two terms 2013-2015 and 2016-2017, Responsible for the doctoral training "Bioactive Molecules, Health and Biotechnologies", 2014-2018, Director of the Laboratory of organic chemistry, 2014-2018, Coordinator of the Bachelor's degree program "Chemistry Sciences", FSDM, 2005-2012), he had prepared a DEUG (2008) and a License (2010) in Private Law in French and a Master in Economics and Management (2013) at the Faculty of Economics, Law, and Social Sciences of Fez. Concerning the scientific research side, He had published more than 85 research articles indexed in several databases (Scopus, Web of Science, Elsevier, Eric, IMIST…).